Are you looking for a product? Check out our online store!
9 Amazing Facts About Kimchi

Kimchi is a preparation of spicy fermented cabbage and other vegetables, native to Korea. In addition to being delicious, kimchi has a rich cultural history.

To learn more about this fermented food, here are 9 amazing facts about kimchi.

The word “kimchi” refers to all vegetables that are traditionally fermented in Korea. In fact, it is more a processing technique than a unique dish!

The most famous kimchi is baechu kimchi (nappa cabbage kimchi). Other popular kimchi are kkakdugi (cubed daikon (radish) kimchi) or chonggak (radish kimchi with their leaves). 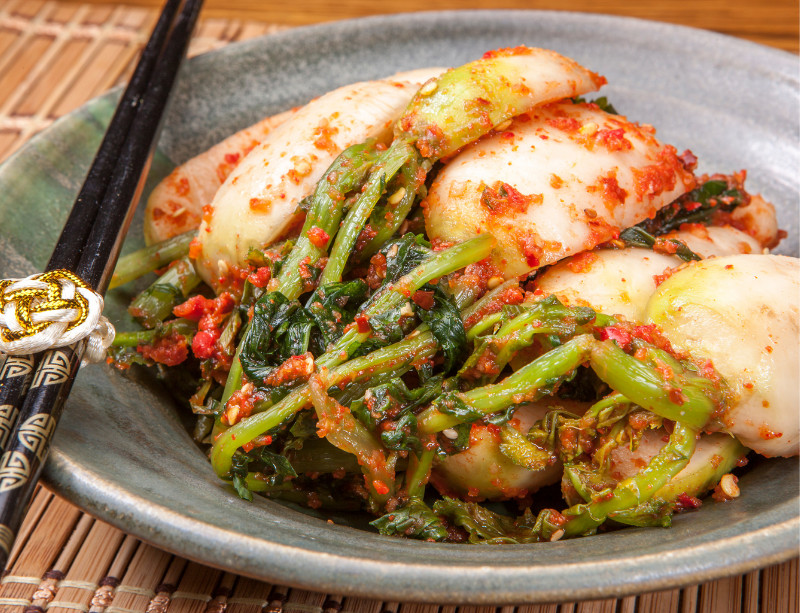 Most kimchis contain dried red peppers, garlic, and ginger. However, they may include radishes, onions, shallots, carrots, leeks, Asian pears, apples, seafood (dried shrimp), and so on. So many tasty ingredients!

2. Kimchi Has Many Benefits

In addition to being delicious, kimchi is a healthy food with many proven benefits.

Kimchi contains fibre, vitamins (B, C, beta carotene, etc.), and many other nutrients. Thanks to the fermentation, kimchi is a living food!

No wonder Health Magazine voted it one of the 5 healthiest foods in the world!

To learn more, check out our article on the benefits of kimchi according to science!

3. Every Korean Family And Region Has Its Own Kimchi

Every Korean family has its own kimchi recipe, passed down from generation to generation. The recipes are based on regional variations tailored to local ingredients.

For example, kimchis from the northern regions of Korea contain less salt and have a less pronounced taste. Because of the colder temperatures, fermentation is slower.

On the contrary, kimchis from the south are saltier, spicier, and ferment faster. The sea products used (anchovies, shrimps, oysters) also vary from region to region.

Family recipes are a great source of pride for Koreans. Therefore, when a Korean woman marries, it is customary for her mother-in-law to teach her her own kimchi recipe. A great way to welcome her into the family.

4. Kimchi Has Been Around For More Than 1500 Years

Kimchis are not new! The first records date back to the era of the Three Kingdoms (57 B.C.-668), where writings describe vegetables soaked in salt water.

At that time, Koreans used to convert their crops into kimchis to preserve them longer. The vegetables were piled up with salt in sandstone jars (onggi), which were then buried. Fermentation and cold preserved the crops. 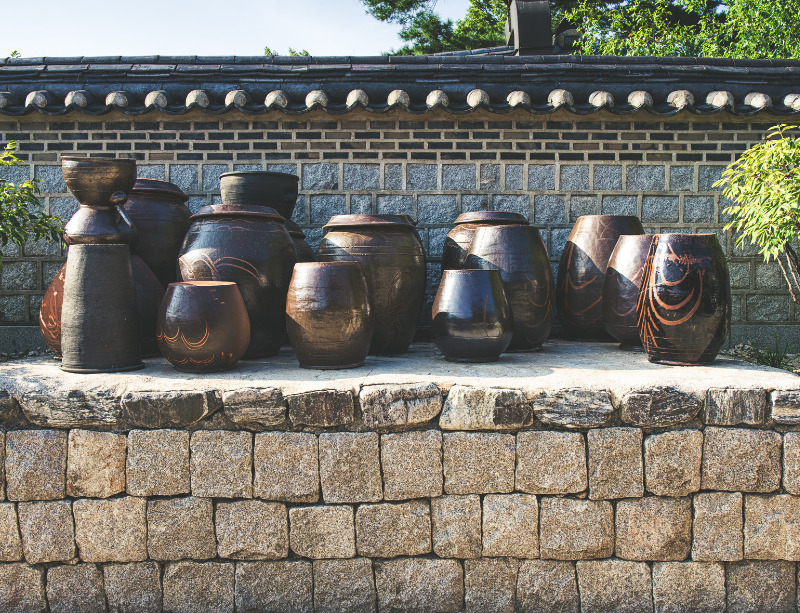 These supplies helped the Koreans get through the winter, preserving the nutrients in the vegetables. Along with rice, kimchis contributed to providing almost all the basic needs of the Koreans.

The first kimchis were humble: simply vegetables and salt! As time went by, different ingredients (garlic, chili pepper, etc.) were added, eventually resulting in the kimchi we know today.

5. Kimchi Used To Be Made Without Chilies

Before the 17th century, kimchi did not contain chili… since chili had not yet arrived in Korea!

Hot chilies originated from the Americas. They arrived in Korea through western merchants in the early 1600s. The Koreans quickly adopted and incorporated them into their kimchis.

Indeed, gochugaru (or chili powder pepper) and its beautiful red color are now essential in kimchis. This pepper has a fruity, slightly smoky, and complex taste. 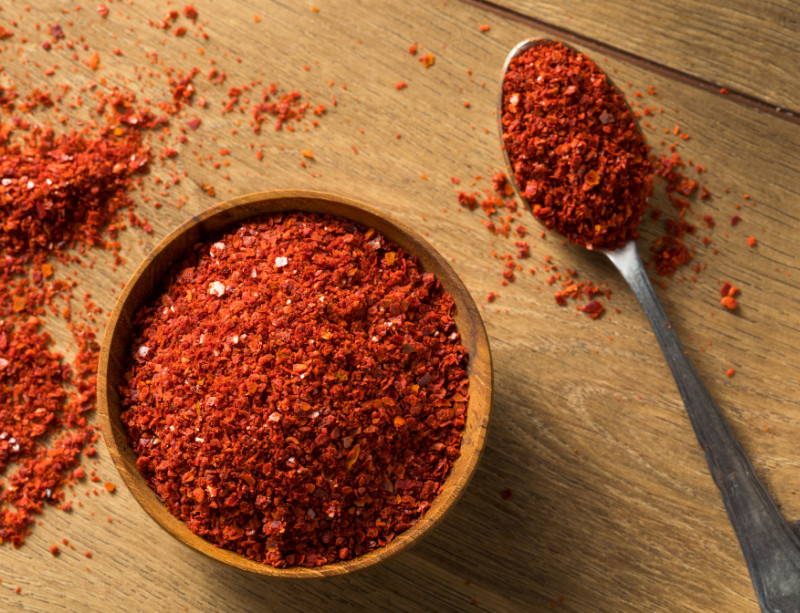 Depending on the variety used, it can produce mild or very hot kimchis! Gochugaru is usually sun-dried and reduced to powder.

6. Kimchis Are Part Of UNESCO’s Heritage

In 2015, UNESCO declared the kimchi and its traditional practices as Korea’s intangible cultural heritage.

Every year, before the winter, families, and communities gather to transform abundant harvests into kimchis. This great celebration is called kimjang. 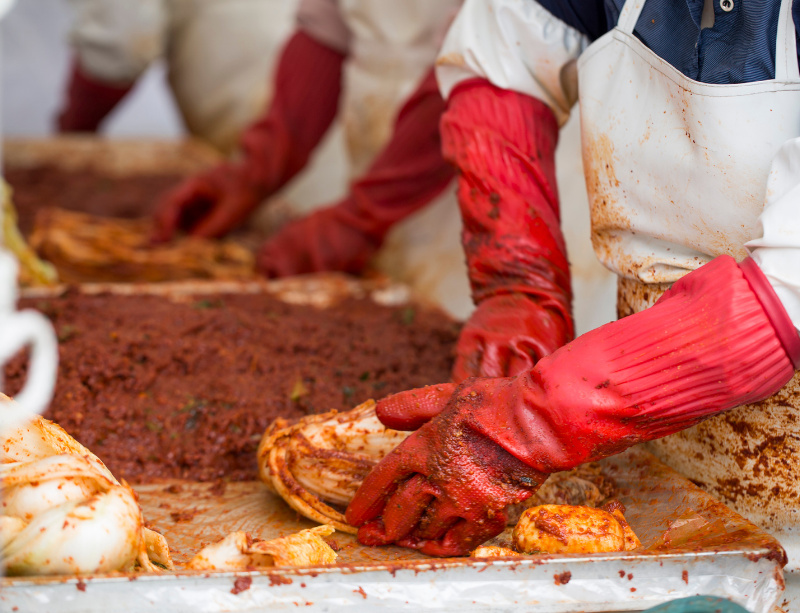 This event is an opportunity for the community to come together. In addition to joining forces to prepare for winter, participants take this occasion to discuss, exchange, and build relationships.

Even though many families are now turning to commercial kimchis, kimjang celebrations still have significant importance in some areas.

To achieve this, scientists developed a recipe specially designed for space. It’s not easy when you’re playing with live food!

Indeed, bacteria, under cosmic radiation could continue to ferment the vacuum-sealed kimchi. There would then be a risk of explosion, and in a space station filled with fragile equipment, this is not ideal!

However, scientists were able to create a stable kimchi by irradiating it after fermentation. This allowed the kimchi to retain its crunchy texture and good fermented taste while remaining safe.

A great success for the pleasure of the Korean astronauts, and a misfortune for the poor bacteria that were not able to be part of the trip!

8. There Are Kimchi Refrigerators

Kimchis used to be kept in heavy terracotta jars buried before the onset of winter. The kimchis fermented in these jars according to the cycle of the seasons.

Also, specialized refrigerators have been developed for long-term storage. They follow a refrigeration cycle that simulates Korean temperatures. Fermentation is then slowed down for optimal preservation of the kimchi.

Another advantage of these refrigerators: the kimchi has a particular smell, which tends to cling to other foods. A separate refrigerator will solve this problem!

9. Kimchi Is Easy To Make At Home!

Your mouth is watering after reading this article? Make your own kimchi at home!

Making kimchi at home is: 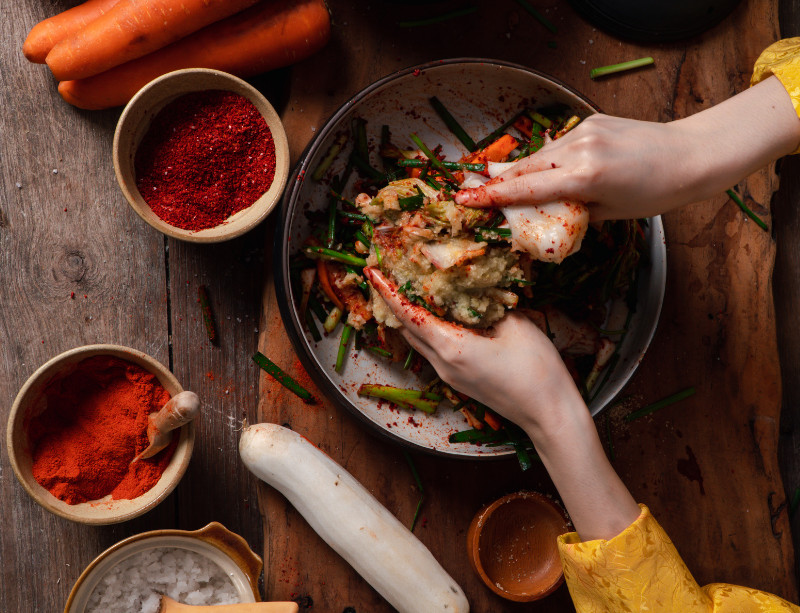 Kimchi follows the basic principles of lacto-fermentation. To make kimchi, you have to slice vegetables, add salt and spices, put them in a jar, and let them rest a few days. That’s it!

With very few ingredients that you will find at the supermarket, you can prepare this delicious fermented dish and enjoy it in many different ways.