Are you looking for a product? Check out our online store!
Local Hop Kombucha Recipe

Combining the sweet and tangy taste of kombucha with the pleasant bitterness of hops? It’s possible, with dry hopped kombucha!

Hops, usually reserved for beer making, give kombucha lemony, resinous, herbal, and/or earthy flavours, depending on the type of hops.

We asked Nicolas Falcimaigne, brewmaster of the Quebec microbrewery Le Caveau des Trois-Pistoles, to share with us his recipe for hop kombucha, the famous “Potion” that created a buzz this summer.

It should be noted that this recipe is for those who already have experience with making kombucha or brewing beer. Following the correct hopping times will be the key to success.

With the Fermentation Revolution team, I recently had the chance to cast a brewer’s eye on the kombucha tradition, by devouring the excellent book “Révolution kombucha“.

It’s a whole new world that aroused my curiosity, and I developed a recipe for a 100% local hopped kombucha, which is now served in barrels at the Caveau des Trois-Pistoles!

In this recipe, the only variable is the flavouring with hops.

Our new beer, Potion #12, features the Centennial hop variety, while Potion #15 uses Chinook hops. These are just examples, as the choice of hops is almost endless!

Hops can be found in shops specialized in beer brewing.

This recipe was designed to be made with raspberry leaves and maple syrup, to only use ingredients produced in Canada. However, you will find in the notes below the equivalences for making the recipe with tea and sugar. 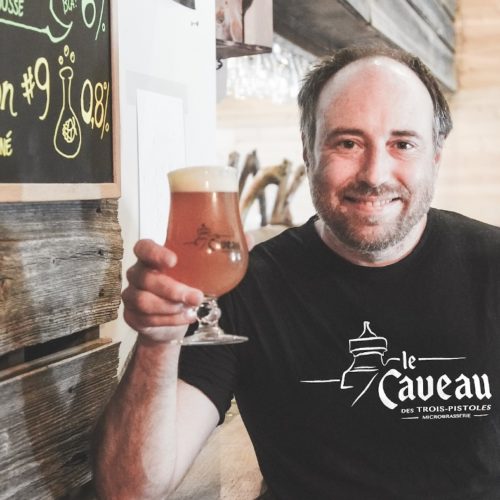 Preparation of the kombucha

For a traditional tea and sugar kombucha recipe, replace the raspberry leaves with 12g of tea (6 tsp.) and the maple syrup with 180 g of sugar (1 cup). Follow the same steps.
Keyword hop kombucha
Have you tried it?Share and tag @revolutionfermentation!

Developing the Bitterness of Hops

Hop cones, the female flowers of the hop plant, provide both bitterness and aroma, depending on how the flavours are extracted. Finding the right balance between the two is the craft brewer’s goal!

Boiling a small quantity of hops for an hour develops the bitterness of this kombucha. This process is called “alpha acid isomerisation“, a process that is also used for brewing beer.

In the beer brewing process, the bittering hops are added while boiling the wort, before fermentation.

To make this hop kombucha, however, the hopping is done after fermentation. This difference, among others, is the reason for its particular taste.

The initial dosage during the isomerisation of the alpha acids is important, as it provides between 20 and 70 IBUs (International Bitterness Units) and will determine the bitterness of our concoction.

The amount of IBU varies according to the percentage of alpha acid of the hops being used. For example, 5g of Saaz hops with 5% alpha acids will produce less bitterness (20 IBU) than 5g of El Dorado hops with 17% (80 IBU).

Aromatic hopping carried out after the isomerisation of the alpha acids is the phase that brings out the fruitier and more delicate flavours of the hops.

This process can vary in terms of type(s) of hops used, quantity, and time. Note that the longer the brew, the more delicate flavours will be preserved, but the less intense they will be.

You could also cold cold macerate the hops in the kombucha for a night in the fridge, using a food-grade nylon bag or by filtering the result. This cold infusion develops amazing aromas!

The acidic and sweet flavours of the kombucha will come out more with milder hops and stronger hops will make your potion a true IPA.

Usually, the combination of kombucha and hop acids produces a citrus flavour that will pleasantly surprise even the most sceptical.

Be careful not to overdo it, however, as too much can create a hop burn, which may or may not be appreciated by IPA drinkers. An endless world of discovery awaits you!

The choice of bottles is important! Hops react to light and develop the famous skunk aroma characteristic of beers sold in transparent bottles.

This is why all beers are usually bottled in brown bottles. I strongly recommend you continue this tradition or put your elixirs away from the light as soon as they are bottled.

To develop this recipe, I was helped by my friend and brewer Jean Deschênes, producer of Les Chants du Fleuve kombucha, four houses away from me. Maybe one day, our hop kombucha Potions will be concocted in larger volumes by Jean and distributed within his network. To be continued!